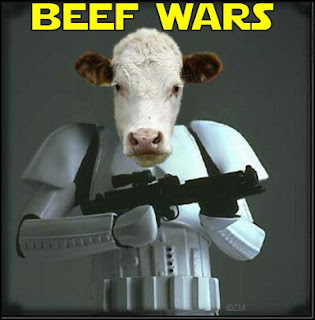 Many of you that read this blog daily know that I don’t eat beef products because I do not like the idea of eating cloned meat, who would have ever thought that George Lucas had it right when he wrote Star Wars so many years ago? Now I know that cloned cattle and storm troopers are not exactly the same but the concept is. The cloned animals are Frankensteined into profit for the big company that can afford the process of inserting the DNA from a super cow or super bull into an empty egg taken from a donor and literally shocking it into life, and then in a dish it grows into their prize money maker, not unlike the Jedi did with good old Boba Fett making all of those Storm troopers. So this animal grown from some DNA cells and an empty egg gets cut into pieces and ends up on our kitchen tables, and where does that leave the little guy farmer in all of this? Yep, you guessed it, out of business because he can’t compete with the big company that’s cloning the food that we willingly put into our bodies. No thanks none for this fella. 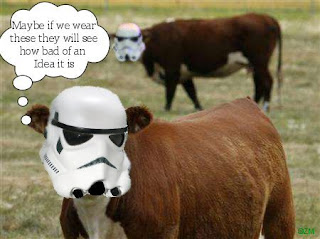 There is nothing from the FDA that states that the cloned meat has to be labeled that way. Any package of beef or gallon of milk in the supermarket may just be from a cloned animal and yet you have no way to make the choice whether you want to eat it or not, I read a poll once which showed that more than 60% of consumers would not buy cloned beef if it was labeled, I just do not agree with it, it feels like they are slipping something into our daily life that just doesn’t need to be there, what exactly is wrong with the cattle that we have been eating all of these years without cloning? It’s all about money and not about anything more than that. If we accept this then the next thing may be bigger, after all we’ve all been eating the cloned meat and no one has died, right? I cannot stress enough how much I do not agree with it.

Everyone is entitled to their opinion on the subject, and there is mine. It is something to think about, whether you want to eat beef that was naturally born and slaughtered or if you want to put an animal into your mouth that was genetically created in a lab because it happened to have some good genes or produced more milk than the cow standing next to it. I am against it and will not eat anything that I know has a chance of being cloned livestock, unfortunately for me this includes pigs as well as cattle so I am limited to fish and fowl for now. hopefully I can get some good fishing in this year and get some fresh caught fish in the freezer so I can avoid store bought meat all together at least for some meals.

Posted by Zeusmeatball at 9:09 PM