Sliding back into a groove is how the last few days have gone, making good decisions where whats going into my mouth is concerned has not been the easiest thing in the world and I am feeling hungry starting about 4pm daily. My body wants more and it wants it right now dammit! but I know that walking through this initial burst of rebellion that will eventually subside needs to be done, then things can get back to normal. 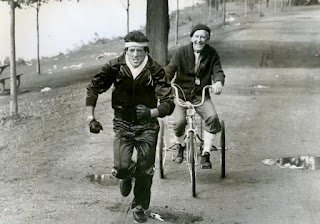 Sticking mainly with whole foods as I was doing before I fell off of the wagon is my plan, I have also started counting calories again while my drinking has remained the same since 2008, 1 gallon of green tea and close to if not more than another gallon of H2O daily so no change was needed there besides stopping with the coffee in the morning.
Over all this "restart" is going as I would hope, the scale is cooperating, getting in some movement is happening and all while I nurse a shoulder injury. Posting in the blog again is helping I think as it gives me a place to "put it out there" how things are going so I will continue to post as often as I can.
Today the post will have to be short, sweet and to the point though as I have my daughter that just woke up so my attention is needed elsewhere, Thank you for the support as of late, the emails are great and the comments help more than you would think.
Until next time
As Ever
Me
Posted by Zeusmeatball at 8:39 AM 7 comments:

Restarting is not as easy as one would have thought, I mean, I've done this before right? Just jump back into the pool and swim away no? No... My good habits have slipped away somewhat so getting back into a groove is tougher that I want it to be but hey! If I don't put on my big boy pants.. And unfortunately I mean that literally and figuratively this time around its not going to get done on its own, so away we go. I tried that wish into one hand and shit into the other thing in an attempt to get some results but I just ended up with a stinky hand... so I suppose I will have to bust ass again to get where I need to be.

When I was 534 pounds I started off slow because I had to, there were no options other than slow and that’s what I did and eventually I dropped a total of 229 pounds at my greatest number. I am in the mindset of a guy that is 300 pounds and can ride 30 miles on his mountain bike in a couple of hours with no side effects besides a big shit eatin' grin stuck to my face for the rest of the day when in reality I have no idea what my limits are currently as I have not ridden my bike since late July. I can tell you that I am not in the shape that I was when 534 was what I was carrying around but I don't think I am close to what I was June of 2011 either and finding a middle ground is proving to be a tad more difficult that I would have expected.

I know, I know... just do what ya can man! indeed this is how it will pan out I am sure but getting my 300 pound mind to understand that I am not there any more is the trick. It seems like I was just convincing myself that I was not 500 pounds any more and when I get a handle on that (which I believe is part of my problem but that’s for another post) I now have to realize that I have put on some significant weight in the last year or so.

When I started off I would walk as far as I could daily, that distance was first measured in minutes, 10 minutes at a time at the pace of my then 2 and a half year old daughter, this pace increased to carrying her on my shoulders for the walk and eventually turned into 30 mile bike rides. I have begun doing my morning stretch routine again, holy hell am I tight! and as I type this there is a road crew outside my house finishing laying a new road, starting tomorrow morning (looks like the road work will be completed today) my walks will resume, this time with my new now almost 2 year old, and no not at her pace, she will ride in the jogging stroller. My intake has been slowly getting back to where it needs to be, I have started logging my intake daily once again and may start posting it on here again the next time I post, which hopefully will be tomorrow. I did keep one of my good habits and that’s drinking the green tea, I refuse to drink calories so I do still drink 1 gallon of green tea per day and it’s been that way since whenever I started that. I mentioned that I refuse to drink calories, that’s almost a whole truth because I have been drinking coffee in the am, I've quit that as of this morning switching it back to a cup of hot green tea instead.

As I type this post out I feel motivated to get my shit back together and start pushing the scale down again, as I mentioned this restarting is almost as hard as the start, I have the knowledge in my belt this time around, I have a taste of what being a "normal" size is to hold onto and we're ready for round two.

All of the comments on the last post helped immensely! Reading some encouraging words, some tough opinions and a few emails from old friends was a really good kick in the ass so thanks for that.

I will attempt to make time to post as often as I can so please stop by again and comments/opinions are always welcome so don’t be shy... lord know I'm not.

Posted by Zeusmeatball at 9:42 AM 3 comments:

Could use some input, Please read me...

There use to be a guy that wrote a blog and lost a bunch of weight, people said that he was inspirational and that what he had accomplished was amazing and to be commended. That fellow once upon a time weighed in at an amazing 534 pounds, life was less than peachy for him at a quarter of a ton. He fought his way down to a for him svelte 305 pounds at his lightest, I admired that guy myself if I am being honest, if you read this blog at all then you know I am that...Honest. Life happens sometimes and using that fact as an excuse is not how this guy gets down but I have to admit that when you are shoveling shit against the tide it’s an exhausting task to say the least and that’s how this ride feels for this fine young lad at this current time in the story line.
I have had zero to no time to sit down and write this blog, or should I say that I had no desire to do so, when the stresses of life step in at times they can feel like trying to push boulders out of the sand with a popsicle stick.. yeah, like that. I have put on more than what I could call a considerable amount of weight since reaching that 305 pound mark, the weight crept up slowly and leveled off then it started creeping back on as I became less conscious of what I was putting into my body and I am currently paying for it in the way of about 75 or so pounds. Fuckin A man, all that hard work and I am allowing it to pack back on, why? Focusing on me is not a luxury that I have right now but that has to change so I figured that perhaps a post on my blog could sway the direction for me back into something that is going to get me back into a groove.
Riding my bikes has not been happening, my daily calisthenics is but something that I use to do and my walks around the lake are non existent, this is starting to look a lot like what I had when I was 500 plus pounds and I will be completely honest with you it scares me. More than a few attempts to get back on track have faltered after only a couple weeks, at times its been days.. being unable to focus on me because of other things happening in my life are taking precedence frustrates me because I know that if this item on the list does not get attention the house of cards can easily fall behind that single card.
What do you do when you know what to do yet are unable to execute the task as it should be? The tools are there, the experience is there and the will is there yet the struggle feels so much harder than it ever has, if I knew the answer to that question I would not be in this situation.
I have to push forward, I need to make my health priority over everything else and I need to do it yesterday not next week or next month but how?... to be continued I suppose and I am going to try to get on and posting more often once again, if you have any suggestions or straight up reality check shit, click that leave a comment button because I could use some fresh perspectives right about now.