So my wife says that I have too many bikes, no surprise there I suppose but she also says that she is tired of stepping over them and since I am not willing to park my Xcal outside and she was not letting go either I had to figure something out. I keep two of my bikes in the house, in my bedroom specifically.. yeah yeah I know but my K2 is set up on the trainer at the moment and the Xcaliber is not going outside so here we are.

The way I see it is that the bike could be art.. stretching? perhaps but even still so I thought about making some sort of system that would allow me to hang the bike in front of a window that's on the side of my room which would A.) get the bike out of my short wife's way and B.) allow the bike to be inside without bothering anyone. After thinking about it, yep a whole 10 minutes, I ran out to the home improvement store for supplies and spent I would guess under five bucks on some wood and the rest of the stuff I had laying around. 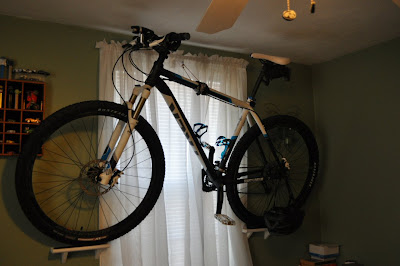 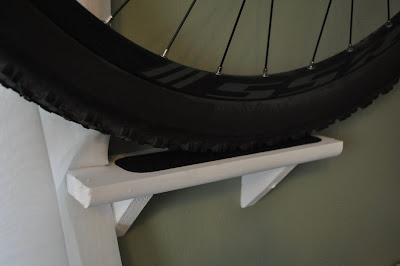 I did make sure to leave room for the curtain to slide behind the shelves to keep them out of the way and somewhat protected from being up against the tires. 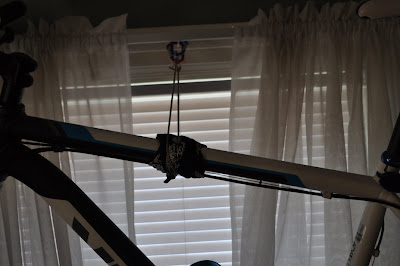 I built two small shelves that would be wide enough for the wheels to sit on yet not stick off of the wall in a way that would be in the way. I measured the window and the bikes foot print fit perfectly and after some quick measurements and some cutting the shelves were made and mounted on the wall, not too bad. For the hanger on the top tube I used a piece of 550 paracord that I had laying around, 2 small carabiners also which I had laying around and a small vinyl coated hook that I had in my box O stuff and viola! the bike was on the wall. After it was mounted and I knew the bike fit it was primed and painted white to match the woodwork  around the window and I used stair tread grip tape in the center just to give the wheel a more positive gripping surface and to keep the wood clean as the tire sits on the tape.

Over all it works awesome, the bike is out of the way and it cost me close to nothing with the grip tape pack being the most expensive thing I had to buy. I did use a bandana around the top tube just to spread the force of the paracord and keep the paint from getting mussed up, I honestly believe that the paracord is soft enough to not hurt the bike but it is no big deal to put the bandana on.

There you have it, my solution to a problem that didn't exist in my eyes but at the same time it is a pretty convenient way to store the bike when its not being ridden and way better than putting it upstairs in our extra room which is used for storage.

I am attempting to post more often again to get my arse back in gear and share with whoever cares to read along the struggles, triumphs and things like this here post so that someone may take something away from my ramblings that might help them in their own struggle.

That's all I got for today.

As Ever
Me
Posted by Zeusmeatball at 7:20 AM 5 comments:

Be your own hero dammit.

When we set our minds to something, we can accomplish almost anything at all in life, I truly believe that statement wholeheartedly.

Motivation, now that is the key because without proper motivation it is very easy to lose sight of the end game, but how about of you made it to the end game and slid back? then what? We all struggle with things in life, for some of us its money, others its health and that list goes on and on and on. When it comes down to it ain't no one gonna do shit for you in life and why should they? if you do not do it for yourself its just not going to get done and when we can realize this all of the things that make us smile all start falling together until one day we're standing at the top of a peak looking down at the world that was once so much smaller than it is now.

Having positive role models is an awesome tool! I know all too well how strong the feeling can be when you are reaching to be like someone or are attempting to emulate what someone has done but I find myself asking why lately. Why? why does it need to be somewhere else that we find strength? why does inspiration need to be found in others? why? Find it in yourself and it will be ever lasting and I believe this to be key because if you are finding inspiration in yourself then we are forced to hold ourselves more accountable, we are forced to make better choices in whatever we do not only because it effects us directly but because you want to be the best you can for that person that finds you an inspiration.

That person is You..

Be your own fuckin' hero dammit, put that cape on every day and hunt down everything that makes your struggle difficult and work through it, kick down the doors and demand whats yours. When you can be your own hero you will work to impress that guy and he will work to impress you, it will become a viscous cycle of trying to one up each others awesomeness until one day you will look back at what once was and be satisfied with what you have accomplished.

what YOU have accomplished....

Be your own hero dammit....

As Ever
Me
Posted by Zeusmeatball at 1:15 PM 10 comments:

A page on facebook popped into my feed and there was a statement "Why I ride" there, I am currently reflecting on things because the struggle with keeping myself in check is in full swing right now and I thought about that statement.

Why do I ride? I ride because there was a point in my life when riding was not a possibility, I watched from the window on my broken couch at 534 pounds as people walked by and honestly asked myself "why would someone want to just go for a walk or ride a bike?" this is where I was. A decision was made to lose weight and during the time that the weight came off I found cycling again, the last time I had ridden I was a kid. On my bicycle I am free, I am limited only by my own strength, my own endurance so as long as there is a road or a trail I can ride. Going from 534 pounds down to 300 paired with cycling could be compared to being a caged animal, one day you realize that the cage is unlocked and watching other people do the things that you want to do is no longer reality because now the wind is on your own face.

It may sound silly to some people that the freedom riding a bicycle gives to me is a very powerful feeling because knowing how the cage feels compared to moving down a trail is such a stark difference. My life on two wheels includes freedom, freedom to go where I want when I want while getting a high at the same time all while under my own power. Now when you were once powerless this is an exceptional feeling, to be moving forward literally and figurativly seeing life through the eyes of the child that you once were atop a frame bolted to some wheels a chain and some handlebars truly is something to not be taken for granted.

I will not be caged..and THAT is why I ride.

As Ever
Me
Posted by Zeusmeatball at 8:53 AM 2 comments:

Don't say it, shut your fuckin mouth and keep on walkin'

I started writing again recently and then it hit the fan again, to put it bluntly I have some pretty stressful shit going on in my life currently and trying to stay focused on my health is extremely hard when I have so many other places my attention needs to be. I am stretched thin right now and just don't have the time to get on here and post as much as I would like and it sucks because this blog is a VERY important tool in my weight loss/health regimen but tonight, sleep deprived and feeling pretty fucked about how this weight game is going right now I came across a post that had been shared on facebook from a person that I do not know.

I will not post her name but if she reads this she needs to know that she IS NOT a fat bitch and kids are stupid. I completely related to what she wrote as I have been there done that with someone taking the time to make sure that their stupid fucking opinion was shouted loudly cementing into a fat persons brain what they already know... Yes world we are quite fucking aware that we are fat, thanks for stating the obvious along with solidifying the fact that you are a complete douche bag.

Struggling with weight loss is as hard as anything I or any other person dealing with it has ever done and people who have never been there do not have the right to say a single negative word about it to anyone who struggles with being over weight. How about if you feel so inclined to make sure stupidity flies out of your mouth you change it into something positive instead, and if that's too hard for you fucking idiots then just keep your mouth shut.

We are fathers, brothers sisters moms and cousins to someone, everyone on the planet struggles with something or will struggle with something and verbally smashing their face in with insults is not helping a single person and that goes for any struggle with any person not just us fatties.

If you have something negative to say fuck off and keep it to yourself, have a look in the mirror and ask yourself why you feel the need to belittle someone else because they are fat before you take time from your day to insult someone whom you do not know.

I will get down off of my soap box now but you get my point.

As Ever
Me
Posted by Zeusmeatball at 8:50 PM 1 comment: