Monday has come again and for whatever reason loads of people use Monday as the day to recover from a weekend of bad eating and no exercise, a silly concept but I think we have all done it at least once in our lives.My weekend went as planned for the most part but I did indulge Sunday a tad more than I should have when a friend came by. For dinner I made a Balsamic vinegar chicken dish which is low calorie and very tasty, I will be sharing that recipe soon but with dinner I had a Heineken and my daughter made cake lollipops and ummm yeah its like that. I may or may not have fell down and a couple few of the cake pops may or may not have slipped into my mouth  accidentally with the fall but I am ok! I did not get hurt on my fall so be calm people! but seriously 3 cake pops a Heineken and some extra chicken with dinner was over my calorie limit for the day.

Offsetting the extra calories I did go for a 2 mile walk, this does not mean that it was ok to go over calories for the day! and the scale just shook its head at me when I stepped onto its soulless white plastic body this morning. Like the pet dog who just got caught tearing up a couch cushion I tucked my tail and walked away with eyes drawn at the floor while the scale pointed at me exclaiming "NO!, Bad human" Fuuuck... Its not a big deal but the first time in three or more weeks that I went over my allowed calories and the scale this morning was a reminder that no matter what I must remain vigilant and stay strict with my intake. It is what it is and nada I can do now so no need dwelling on it, I will stick to the plan for today and do a little extra exercise today. 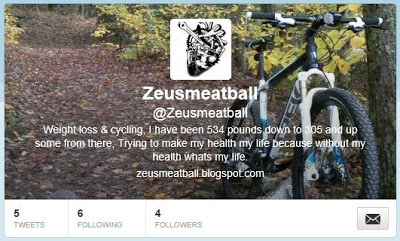 On a different channel we find that Zeusmeatball now has a twitter account @Zeusmeatball, a friend told me that I should make one so I did in the beginning of December and I couldn't figure it all out so it stayed unused until yesterday. Another friend was over and he uses Twitter so I asked him to show me some of the features and it was a duh moment for me because its really kind of easy though I am sure I am still missing some of the features. Please feel free to add me or follow me or whatever you do on twitter there is a link at the top left of the blog, I have 4 followers at the moment and will be using twitter more often now that I have a basic understanding of how it works.

So far this "restart" is going well, I have had the one slip up yesterday and it was not a huge slip so all in all I think we are doing good. Adding regular bike rides back into the schedule will surely help the cause and the K2 will likely be the bike that gets used for now until I drop a few more pounds and get my cycling legs back because let me tell ya, I am not in the shape I was in a year ago as far as my stamina and endurance goes. Regular walks are on the menu for this week as well, Normally I would walk around the lake that I live on and it was a nice mid range walk for me that made me feel like I did something but I am currently walking a 2 mile loop and its about right for feeling that I did something and not over doing it.

Over all we're doing awesome, feeling awesome and now again I will mention on Twitter so follow @Zeusmeatball if you were interested in whats going on there.

Thanks for reading along with my walk down a path to better health.

As Ever
Me
Posted by Zeusmeatball at 9:22 AM