Just over eight and a half months ago a guy made the decision to lose weight, Today is the day that he can say that he has lost more than 150 pounds in that time, yes I said more. upon waking up this Friday of course I jumped right onto the scale to see what the results for this week were and to say woah! I am putting it lightly, the reading on the display said 381.6 pounds, ok off to a good start, next go says 381.8, then a final 381.6! I am going to roll that up to 382 pounds which is a 7 pound drop this week and brings me to 152 total pounds lost, what can I say to that other than wow. I can also say with one hundred percent certainty that I did not expect to have lost this much in the time it has been. in Jan I had a conversation with my wife and remember telling her that I wanted to lose 100 pounds by Jan 2009 and here I am it is September 12th and I am down 152 pounds. what else is there to say really? here is the compare photo that I promised I would post when I hit 150 pounds lost and a snap of the scale this morning. 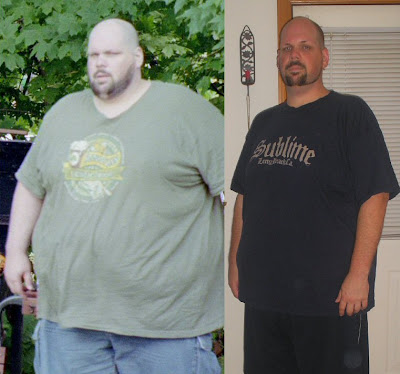 The above photo shows a 152 pound loss. click the picture for a full sized view. 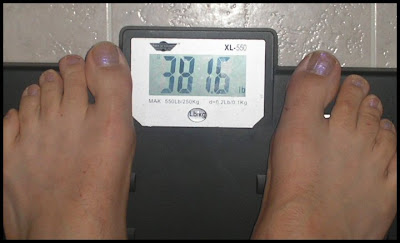 Here is a picture of the scale this morning, yes that is light pink nail polish on my toe nails, any of you with daughters will understand this one. 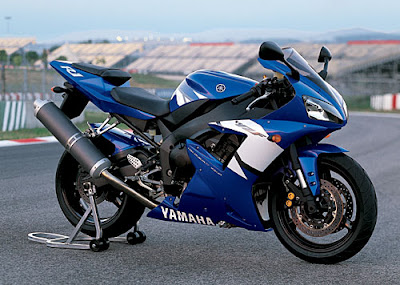 This Yamaha YZF-R1 weighs in at 382 pounds and is what I currently weigh. 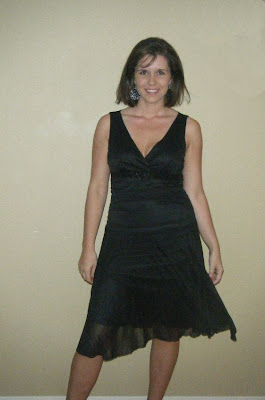 Here is a picture of Robyn she weighs 150 pounds in this picture and is one of if not my biggest supporter on this blog since I started it, the plan was to have her weigh what I lost at the same time for the compare shots so lets pretend she has just drank a HUGE glass of water and we will say I have lost a whole Robyn! She has lost 50 pounds in the same time that I have lost my weight, and for the record Robyn is not my wife lol (got lots of emails about that).
With this weeks loss I am within 7 pounds of having less than 100 pounds to go until I hit my goal of 275 pounds. so I will be shooting for that number in the next couple weeks. the more I think about what I have accomplished the more unbelievable it is to me, I mean seriously, think about this for a second, if I would have not decided to lose the weight I would still be a 534 pound unhappy fella thinking about doing it. to anyone out there that is thinking about dropping some weight and either cannot decide, or cannot commit to doing it think about this, what were you doing eight and a half months ago? what did you weigh eight and a half months ago? now think about this I just lost 152 pounds in that time, and with no drugs, miracle pills or miracle plans, I did it with good old fashioned determination, discipline and drive and if I can do it anyone can, so what are ya waiting for?

Thank you for reading along and for those of you that have supported me with your comments and e-mails Thank you doubly.
As Ever
Me
Posted by Zeusmeatball at 7:15 AM