Weekends seem to go by too quickly, Saturday morning comes, the day begins and it seems that Sunday night is there faster than it should have been. There is a difference in the weekends now compared to back when I was much heavier though and these days my time is spent enjoying life instead of shooting people up in Socom2 online. I had the luxury of going to a local fair on Saturday and spent about 4 hours walking around the fairgrounds while the kids rode the rides and Wify and me just enjoyed all of what was going on. I did however eat a fried dough and a cinnamon bun at the fair so I didn't stay where I needed to with the intake but its not anything that will ruin my outlook on how my weekend went. My daughter has been copying me lately and that's something that I am not disappointed in one bit because she is making up exercise games and said that she wants to start coming to the gym with me, of course I told her that she would have to wait until she was 16 for the gym but I will exercise with her any time that she wants to. 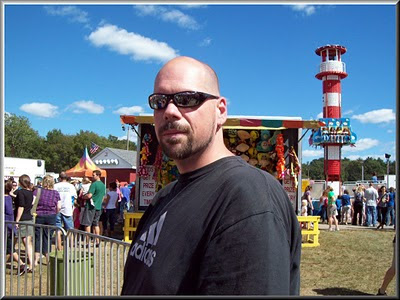 Just me at the fair, yes yes I know I always have an Adidas shirt on, truth is I have about 10 of them, same shirt, same size, three colors no waiting. When ya find one that fits right ya go with it!
Sunday I was relaxing on the couch while my daughter played with a friend in her bed room and when the play date was finished she asked for some plain white paper, so I obliged and gave her some from the printer. She began writing in little boxes that she had drawn onto the paper and then asked me for some names of exercises and how to spell them, Wify wrote a few and the kid wrote some more and then cut them all out. The game that she made up was that Mom would pull a random paper square out of a box and read the exercise off of it, I would demonstrate how to do it and she would then do as many as she could. I don't know if Wify picked up on it but I was smiling ear to ear when that little girl asked me to play it with her because I was genuinely enjoying this game that she made up on a whim and I believe that it shows that I am making a difference in her way of thinking even at age five. 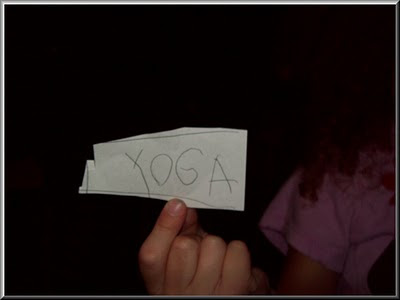 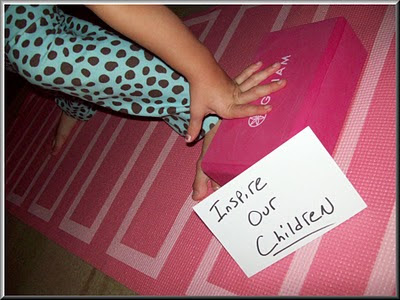 Something that I have realized during this whole process is that our kids will follow us, whether it is into oblivion or to mountain tops they do as we do. I think that I am going to dedicate this week to inspiring my kids to be as active as possible in everything that they do more so than I do normally, if I had been inspired at an early age to be active perhaps I would never have made it to more than a quarter of a ton in weight. I think that every one of you that reads this post should do something inspiring to one child this week, even if you have no kids find a way to be a positive role model to a child in some kind of a way that promotes health and fitness. Let a child see how fun you are having when you are out for your run, or your bike ride, perhaps just give a positive smile or a wave to a kid playing a sport and I think it will go further to better their young outlook on fitness than we know.

Making a game from paper clippings followed by some exercise is far from socom2 on a PlayStation and I am happy that its the way things are going. I have said before that I have changed my life by deciding to lose some weight and make fitness a huge part of that life but in truth I am changing more than just my life because the lives of my children will certainly be enriched because of how I live now. Eating healthy and exercising as much as possible is as much a part of my days as anything else and I actually enjoy this healthier way of living a lot more than the drag ass days of sodium and fat packed dinners from a sack followed by hours of being stationary.

With that the end has come to this episode of as the fat guy turns, now get out there and inspire a child to walk the path of healthy living so that we may not have to read their blogs about how they struggled to lose 200 plus pounds.

As Ever
Me
Posted by Zeusmeatball at 7:16 AM