We all have options.

Today I will get a post up before I do my workout, a lot of the reason is because I am not sure what I want to do yet! Will it be my regular ride down the trail? perhaps the gym is in my future? or maybe I will go check out a new trail that was shown to me, whatever I choose its great having options. I have been thinking a lot lately about how things were compared to how they are now, knowing all of this that I was missing out on cannot be taken back forces me to appreciate every ride, every run and anything that I can do now because of losing the weight. I eat differently, my daily activities are different and honestly the way that I see things is different too! It really is amazing what dropping more than 200 pounds from ones bones can do. 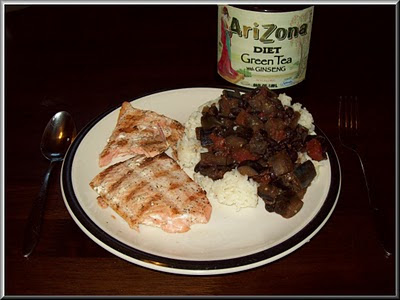 5.5oz grilled salmon fillet, 3/4 cup cooked white rice, 3/4 cup eggplant, tomato and beans and of course the green tea for a total of 467 calories.
My intake was 1765 yesterday and included a dinner of grilled salmon fillets with a side of rice covered in eggplant, fresh from the garden of course with black beans and tomatoes again fresh from the garden seasoned with black pepper and minced garlic. I got the idea for the eggplant mash from the other Tony that lost a bunch of weight, He used it as a bean salad and I made mine hot with fresh tomato and put it over rice but it was the same general idea and I am glad that I found the idea from him. The entire plate was 467 calories and included 5.5 oz of fresh grilled salmon so to say that it was filling would be an understatement and it let me use a bunch of the eggplant and tomatoes that I still had in the garden so I am happy with it.

Exercise was a trip to the gym where as I said in yesterdays post I did 20 minutes on the stationary bike and 20 on the treadmill followed by a just over 12 mile bike ride which is starting to feel like par for the course to me. The first time I ventured out on a longer than usual ride it felt long and hard, now its just what it is and I enjoy every minute of it, even the hills! My normal rides have been hard and fast all hills and on road but since trying the trail out I am enjoying the longer duration rides and the views are definitely better, in fact I found a nice little fishing spot that I will try out next year when trout season starts up again. I really do enjoy myself with my exercise whether it be at the gym or out on the bike and that's not something that I would have ever expected to say when I began in 2008 so if you are reading this and feel that exercise is not something that you will be able to enjoy try it out for a while and see for yourself.

When a person weighs 534 pounds and is stuck in a couch it is hard to see it but we all have options, we all have the choice to either sit there and rot or get up and at least try to do something about the situation. There is no need to run a mile on the first day but getting up and simply walking a bit can be the first steps to a healthier version of yourself and I would never dare say that unless I believed it and I believe it because I did it. Choosing to get up and make small changes until they became habits which lead to bigger changes and a life full of views that had been long forgotten not to mention the whole not dying an early death thing is a good start.

What are you waiting for? put that cookie down, get your ass up off of the chair and go do something!
As Ever
Me
Posted by Zeusmeatball at 9:07 AM