Feeling amazing I float through my days effortlessly where this whole diet and exercise thang is concerned, at the gym I am in my element and I started the weight lifting again with yesterdays trip. There is something about being at the gym that motivates me, it could be that other people doing the same thing in a group sets the pace or perhaps just having all of that equipment just waiting for me to hop on and go, I am unsure. Yesterday I did 30 minutes on the stationary bike followed by some weight lifting for my biceps, shoulders and upper back when that was finished a 15 minute brisk walk on a treadmill finished my time at the gym. When I joined the gym I was worried about what all of the "healthy" people would think about this fat dude riding his ass off on a stationary bike, I worried about using the weight machines and competing with hyper ripped body builder types and was plain old intimidated with the idea but as soon as I went I quickly found out that all of the worry was for naught.
My life has changed so much in the last two and a half years because of making the decision to live healthier, I am sure that it has changed in ways that I am even unaware of. A once 534 pound fella I am now unlimited in what I do, simple changes in the way that I eat and conduct my exercise regimen has brought me to where I am today. Now don't let the word simple fool you, the changes were simple but following through with them well that was the hard part because losing any amount of weight is not easy when they are backed up by years of bad habits. 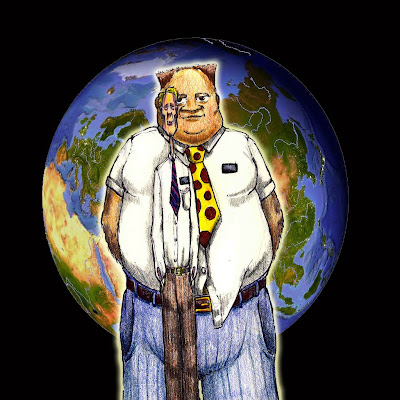 When I started writing in this blog I just wanted to have a place to write down how I was doing and today around 3PM AOL and Thatsfit.com is featuring me in an article about people that have blogged away weight, too cool. My wife has dropped 75 pounds in the same time that I dropped my more than 200 pounds and to say that our lives are improved since making the decision does not begin to say how much has changed, we are different people inside and out. When you weigh as much as a sports bike its hard to do anything past sitting on your ass and lifting fork to mouth let alone do anything that could be considered living a full life but somehow when I was on that side of the equation it was easy to rationalize the situation as normal. There is no one way to have a successful weight loss program but the root must be the same in my opinion, we have to get to a point where enough is enough and simply making the commitment to stick to whatever plan we choose has to be made.

I know people that have lost weight by calorie counting and have been successful, just look at me, then there are those that have used plans like weight watchers and have had great results and still other people who have used other means. There is no one way to do it but the one thing that every successful weight loss regimen has in common is being consistent with the chosen plan, I didn't gain 250 extra pounds over night and its not going to come off over night but if we are consistently eating well and working out better health will follow every time.

The time has come for me to go beat up on a bike at the gym but I will be checking for the article on Thatsfit pretty much all day and i will post a link directly to the article as soon as I see it pop in there. Tomorrows episode of as the fat guy turns will be sure to have white knuckle moments along with some tears and possibly a new recipe so make sure that you tune in to see what happens next. As always thanks for following along with me and my trip to the half, drink much and move more than that and a healthy life can and will be yours for the taking, that's all I got for today.

As Ever
Me
Posted by Zeusmeatball at 8:22 AM