A summary of sorts.

I don't read many magazines, I watch fewer television than most people and really don't read any "diet" books, I never have, Taking a "diet" pill is a foreign concept to me and I don't think that I am like most people that have battled with weight issues and yet am one in the same on so many levels. I came into this world once upon a time in the 70's and honestly remember a normal childhood for the most part, I mean sure I was called fat from time to time and always seemed to be the biggest kid in a group but so what? I knew kids that got called broomstick, nerd, chick-a-dude, fag, burn out and scare crow, why would it define a person? you know someone else's opinion. I honestly felt that everyone had tags at that age and like I said for the most part felt like part of the group, sort of like Our gang aka the little rascals, at least in the younger years because once about 7th grade hit and the opposite sex started playing a role things changed a bit. 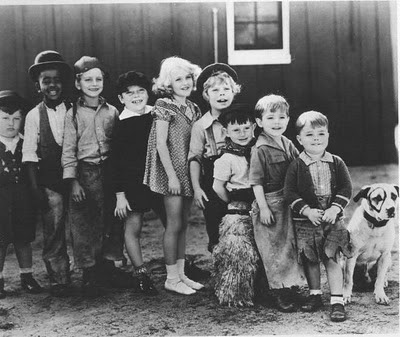 Broomstick did ok, burn out and scare crow even got some play but the fat kids always got relabeled, the funny kid and some even got called bully mostly because of our size on the latter I suppose but this was indeed around the time that I remember the whole "fat" persona becoming an issue. Even though this was my label not of choice I did ok as far as having friends enough to get into trouble with but having that "fat" label stick so hard and actually mean something started bothering me but hey! its who I was right chick-a-dude? so of course I embraced it. I can remember my mother offering me a dollar for every pound that I lost back around that time and I thought, "a dollar per pound? what I am I Bologna?" Nah, I'm good. Never once in my life have I taken a so called "diet pill" I have had friends offer advice throughout the years and never once did I take it. My best friend whom was getting that fat label because of the rotundness that was forming around him one summer decided that he wasn't going to be a round boy any more and literally just cut what he ate in half and lost a lot of weight over a summer and even seeing that and knowing how he did it I just said "cool! wanna go for a bike ride?" seriously it happened just like that.

Graduating high school lead to one (or was it two) of the best summers to date for me, lots of hanging at the beach with pony bottles of bud (because we were bad asses like that) and good times, but alas! I hadn't an ol lady on my arm and this was problematic for me. One would think that the time to hunker down and drop some weight was here! I mean here I was 18 or 19 years old and about 350 pounds no lady and a ton of good times but was I really happy? gleefully miserable perhaps but that being alone thing was the real poker. Never even considering the option of dropping some weight more seriously than a day or two of not eating bad only to get right back to it the following day or hour was pretty much the routine. I was that big guy, it was who I am and if someone was going to be with me then its who they got because its the way it was going to be, nothing more, nothing less.

None of that got me to ever read a "diet" book, nothing in that list made me want to run out and join some pay per plan and even though I watched my aunts take every diet pill on the market and count calories with some success it was never an option for me. I read lots of Sports nutrition, weight lifting, power lifting, whole foods, and regular old nutrition books over the years starting around age 17 or so and a lot of that stuck but applying it wasn't as easy as reading it. I knew what I needed to do but was happier running up to Port Chester NY to hit the after hour bars or heading to New Haven for a hardcore show than applying anything healthy to my life. The "big guy" now more than the fat guy now but at the core of it I was in fact still the fat guy, one day I decided that I would run so I started going to a park in Fairfield CT and run at night, me? the fat guy? running? yes sir, I sure did.

The running was short lived and back to the lifestyle that got me upwards of 350 pounds I went, shortly thereafter the love of my life walked in and I found myself going to California without an aching in my heart. BAMN! blew my back out shortly after getting to Cali and ended up gaining most of my weight there, one day I looked in the mirror and didn't recognize the guy looking back and it was all down hill from there. My high weight is 534 pounds, I was more than that the summer before I began losing the weight that is recorded in my blog and if I had to guess I would say I was probably 30 pounds more than the 534 mark in early 2007. Still "diet" pills had no place in my life, Weight watchers and slimfast, any of those pay to play programs always seemed like a rip off to me so I never even considered them an option but what could I do?

I decided that I would go the calorie counting road and see what happened, I dusted off some of my old nutrition books a short time after starting and I have lost more than 200 pounds so far without the help of anything with the word "diet" pasted to it. There is enough information out there that in my VERY humble opinion anyone can carve their way down to whatever weight they so desire as long as the work is put into it. I read blogs and see stories on the internet and elsewhere about how people dropped thousands of dollars into every diet plan on the planet before they realized that hard work, discipline and adding movement into their lives is the key to living healthy and I am proud to say that I have never fallen prey to that kind of thing. I think that those plans can work and have heard of people having had great success on some of them but I am also in the opinion that they work because of the change in thinking of the people on them more than the plan itself, which can be acquired without any monthly payment.

My life has changed in more ways than any of you reading this blog knows and I share a lot here! I look in the mirror these days and the guy that looks back is someone that I want to be. We have to make the most of every minute that we have because if we choose to eat fatty foods in excessive amounts while sitting on our arses, it will only lead us to looking at a reflection that does not match what our minds eye knows and an early death could be lurking around the next corner. Discipline, hard work and staying focused on eating healthy while getting some movement into each of our days is a must to lose the weight that holds us back, it doesn't matter if you choose to let someone create a plan for you or read up and create your own but sicking to it and doing something about the problem is the only thing that is going to help the weight come off.
Moral of this story you ask? Put the cupcake down, get up off of your ass! its the only way that its going to work.
That's all I got for today

As Ever
Me
Posted by Zeusmeatball at 8:26 AM