After getting back onto a bike back in 2009 I wasn't sure about just how seriously I would end up riding and at the time thought that the $319 that I originally paid for my K2 Zed was a lot, I was aware that there were bikes out there for much more but felt that it was un-needed as well as unnecessary to have such a contraption. After breaking some things on the K2 mostly because of my stature but partially because it was a very entry level bicycle it was decided that the next bicycle that I bought new would be an upgrade. That time came in the Summer of 2011, after selling the boss lady AKA "Wify" on the idea of a new bike I was internet shopping for my options and came up with a Specialized Carve (dreaming I thought), the slightly lower end Specialized Rockhopper 29er (still more than I was expecting to get cleared for), or the Trek Gary Fisher collection Cobia, Long story short I ended up with a 2011 Trek Gary Fisher collection X-caliber at end of the season pricing. 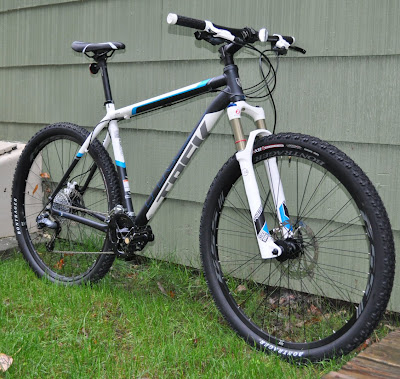 The day after I brought the Xcal home.
How did the X-caliber get in there? it wasn't on your list you may be saying to yourself, this is true it was not on my list because it was out of my budget but a deal was struck with the boss lady that for every week that we did not indulge in a dinner out we can add to the new bike fund. The X-caliber cost me slightly more than what a 2012 Cobia would have cost me and the component upgrades on the Xcal were worth the extra dough let alone the fact that it is a really cool looking bike with its Matte white and black paint job! 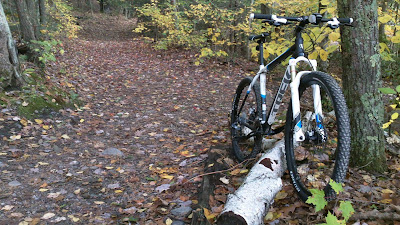 Looking down part of the trail on the maiden voyage.
The first time out on the new ride we went 25 miles and I don't know if its like when a kid gets new sneakers or if its the 29er Kool aid but it was a very easy ride and we did it pretty fast too, I was pleased with the new purchase. I have not added too much to this bike yet as I just got it in early October-ish of 2011 but I did add some small dress up bits so far and other than "bling" there is nothing that I really "need" for the bike, here is what has been added or changed.
Sunline Twisted waffle lock on grips
Salsa liplock seatpost clamp (blue)
Garmin GPS mount
Blue ti headset bolt
Blue bottle cage bolts
Odyssey trail mix pedals
XXF bottle cages
White Crudcatcher front fender 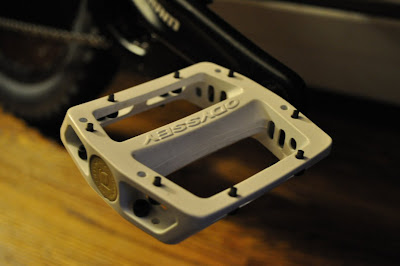 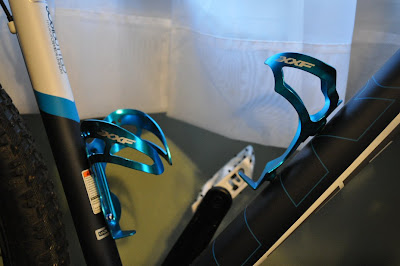 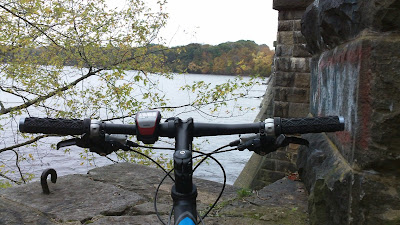 Looking over the Connecticut river you can see the Garmin mounted on the bars.
This is the most expensive bicycle that I own, I have owned cars that I paid less for! that fact still amazes me to this day and that isn't even the worse part! I am wanting to build another 29er with some very specific things in mind and that project can easily go over the price paid for the Xcal. I usually bring along my camera when I go on a ride, especially if I know it will be a longer ride or at a new place so I have plenty of photos to share here and on the blog. 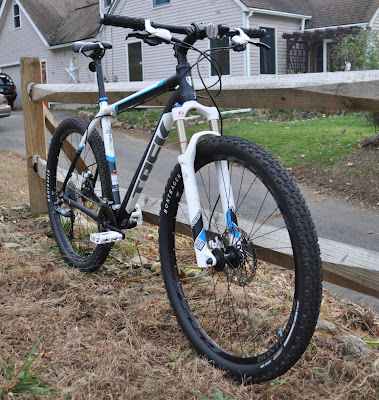 This is the current state of the X-caliber... kind of. 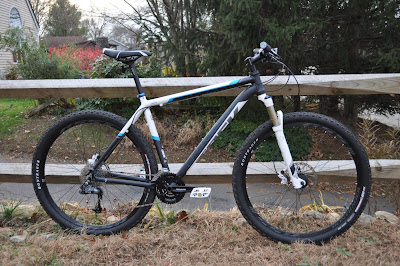 Kind of because obviously there are no bottle cages on it and the Crudcatcher is not on in this photo but the blue bits are there and you can see how the white Odyssey pedals look in this shot. This bike will undoubtedly bring me many miles of ear to ear smiles I am sure, and I can't wait for the weather to warm up and dry out a bit because riding down a cold muddy trail is not as fun as a dry trail with the sun on my back. I love the way this bike fits me with its long top tube and the Bontrager big sweep 12 bars seem to just fit the angle of my hands like it was made for me, in fact I am thinking about buying 2 more for the other 2 bikes that I ride! 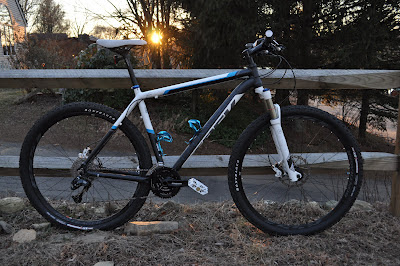 Here is the latest form the Trek has taken, updated 02-06-12, I changed the saddle out from the stock Evoke 1 to a Bontrager Affinity 1 WSD, yes its a woman's saddle! I have ridden on a woman's saddle once before and it worked out good and the price paid for this seat was so good that it won't matter if I need to replace it. You can also see the XXF bottle cages in this latest shot and I think that this bike is very visually appealing with the white saddle and pedal combination on it. 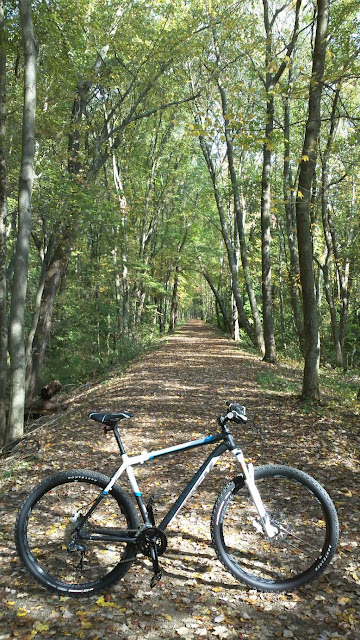 I am pleased with the purchase and since I have only put limited miles on it can't really give a better review just yet, I am sure as soon as it warms up a bit I will get my chance.
Thanks for checking out my bike, don't forget to take a look at the other links at the top of the page!