This is my K2 Zed 3.2 mountain bike, it is the bicycle that got me back onto two wheels back in 2009 and it was sort of an impulse buy after researching and almost buying a Specialized Hardrock. I bought the bike after walking past it in a local sporting goods store and part of the reason I liked it was the beefiness of the frame, I was very apprehensive about buying a bike for $319 at the time but called my wife to get her blessing and 20 minutes later it was in the car on the way home. 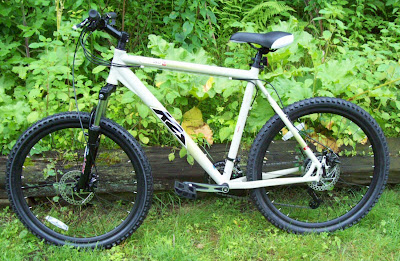 This is an image from the day after I brought it home.


I was very impressed just because of the fact that it had disk brakes, the last bike that I had owned was a 70's Schwinn Super Le tour which was light years away from this, I mean this had disk brakes! onto my first ride I went and less than a mile away from the house I was panting out of breath and my arse was not happy about the new purchase, I rode home thinking about whether I had just wasted $319 dollars. 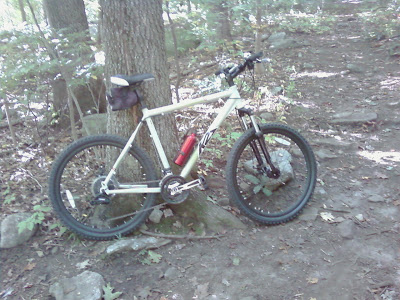 Cell phone image from the first time I made it all the way around the lake.


You can see I added a water bottle and a seat bag, I also adjusted the seat and bars by then, I was figuring this bike riding thing out all over again. I for the longest time just rode 3 to 5 miles at a time and one day I decided that I would try the rail trail out, 12 miles later I was completely hooked and the rest is how do they say? history. 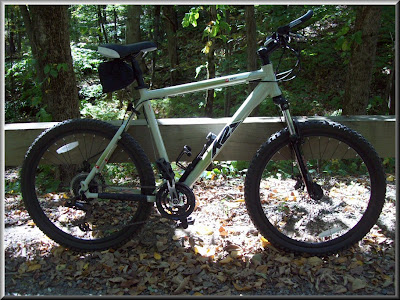 First round trip completion of a ride on the rail trail, I was completely pumped when I took this picture.


Since I have had this bike lots of changes have been made to it, I basically decided that I would upgrade things as things broke, I ate the bottom bracket up, destroyed the resin pedals, took the front derailleur apart in an attempt to tune it up myself before I knew what I was doing, bent the seat rails, stripped the bolt in the seat post, broke a chain because I was trying to shift while putting power to the pedals and some other small stuff. This bike was a learning tool as much as it was a path into bicycling for me, I have had people look at me sideways when I say that I ride a K2 and others have gotten into cycling when they took a look because they thought it was a nice bike, I have made this bike into "my" bike and have no plans on stopping the pedals from turning any time soon. Up until I bought the Trek X-caliber this was my most ridden bike and still holds that title to this day, here is a list of whats been upgraded on it. 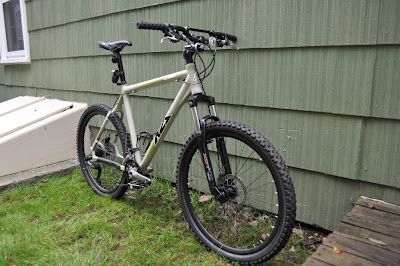 This is the current state of the k2... kind of. 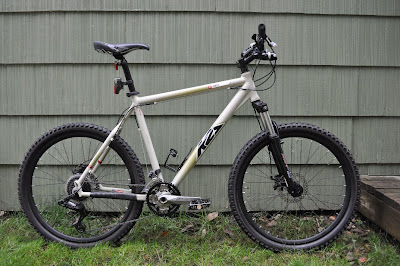 I say kind of because this bike is currently being used as my trainer bike, those are not the WTB Graffiti tires either so that's why I say kind of. The bike currently is wearing the trainer tires and sitting in the living room even though my wife is not happy about its place there she knows that it needs to be there so that I have easy access to ride it on the trainer so she deals with it. 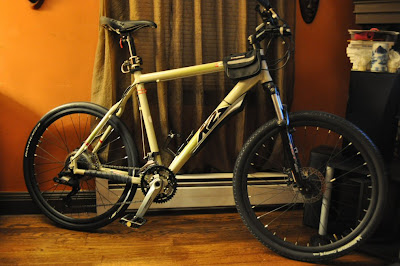 You can see the Adams trail a bike adapter on the seat post where the Radbot 1000 usually lives, this is the trainer set up.


This may not be the highest end bike in the world but it is what I made it, it got me back onto a bicycle and it fits me great! I am not sure that I would ever get rid of this bicycle as it's given me miles and miles of awesome views, great workouts and generally puts a smile on my face. I have some future plans for the bike that include a SRAM X7 rear derailleur that I picked up a while back and just haven't installed it yet, I am toying with the idea of getting a rigid fork for it and I would like to upgrade the stem and bars at some point, I have a Sunline V1 XC stem that I think would pair nicely with a set of Bontrager big sweep bars but that is just ideas at this point. 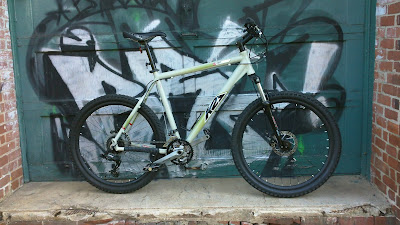 There you have my K2 Zed 3.2 in a nutshell, its not stock yet its not super modified but it is set up so that it works for me and I am very happy with the bicycle.